Start by doing your own research into some of the artists discussed above. Then, using slow shutter speeds, the multiple exposure function, or another technique inspired by the examples above, try to record the trace of movement within the frame. You can be as experimental as you like. Add a selection of shots together with relevant shooting data and a description of process (how you captured the shots) to your learning log.

Michael Wesely
“Time is more like the vehicle I use to arrive at images and photos,”

Michael Wesely is a contemporary German photographer. His pioneering techniques have allowed him to capture uniquely long exposures of cities, architecture, still lifes, interiors, and portraits. Wesely uses a special pin-hole camera to create his photographs, which are concerned with ideas of temporality and ephemera, and present still images that literally embody the passage of time. “Time is more like the vehicle I use to arrive at images and photos,” he has explained. “The extreme length of exposure leads to a shift in perception. It’s no longer the motif alone that counts—that is often a more invisible than visible, merely looming presence. But peripheral conditions such as light, movement, and other atmospheric elements emerge differently as focal points.” (artnet)

If Harold Edgerton helped us see the unseeable by freezing time Michael Wesley showed us how to see the ‘hidden visible’ by talking long exposures (days, months, years). As Michael Wesely commented “this conceptual positioning stands in direct opposition to the theorisation of the ‘decisive moment’ previously argued for in the production of a photograph. Hence rather than a punctum we are presented with polyvalent levels of time-based accumulation”.

“Compared to most photographic exposure techniques, the strip technique differs in its relation to time. Strip images contain a fourth dimension, that of time. The technique is used for, among other things, 360 ° panorama photography and the photo-finish (sports timing equipment), and can best be conceived as a scanning technique. Just one line (plane) of information is recorded. By moving this line (plane in front of the lens) one builds up an area, but at the same time, one creates a time-line. In other words, the camera does not expose a single frame in a fraction of a second but records movements through a narrow slit onto moving film. With regard to any vertical line in the image, the short or long strips of photographic images always show a small section before, during, and after. In this sense, they are photographic images that cry out for movement. After all, when you look at them and you try to translate the images back into a graspable reality, you have to compose the image, again and again, using elements left and right of the point you are looking at, points from before and after.” 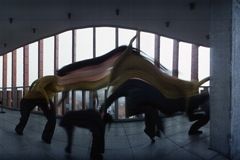 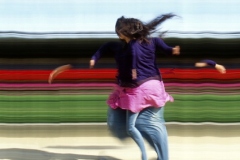 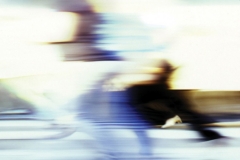 Francesca Stern Woodman (April 3, 1958 – January 19, 1981) was an American photographer best known for her black and white pictures featuring either herself or female models.

Many of her photographs show women, naked or clothed, blurred (due to movement and long exposure times), merging with their surroundings, or whose faces are obscured.
Her work continues to be the subject of much positive critical attention, years after her death at the age of 22, in 1981
(wikipedia)
Woodman used slow shutter speeds and long exposure times for her photographs resulting in blurred and spatially displaced compositions. Much has been written about the intent of these photographs in the context of her subsequent suicide. Gerry Badger argues that they represent to some extent her emotional state expressed through time and space (due to the method of slow shutter speed and blurred movement).